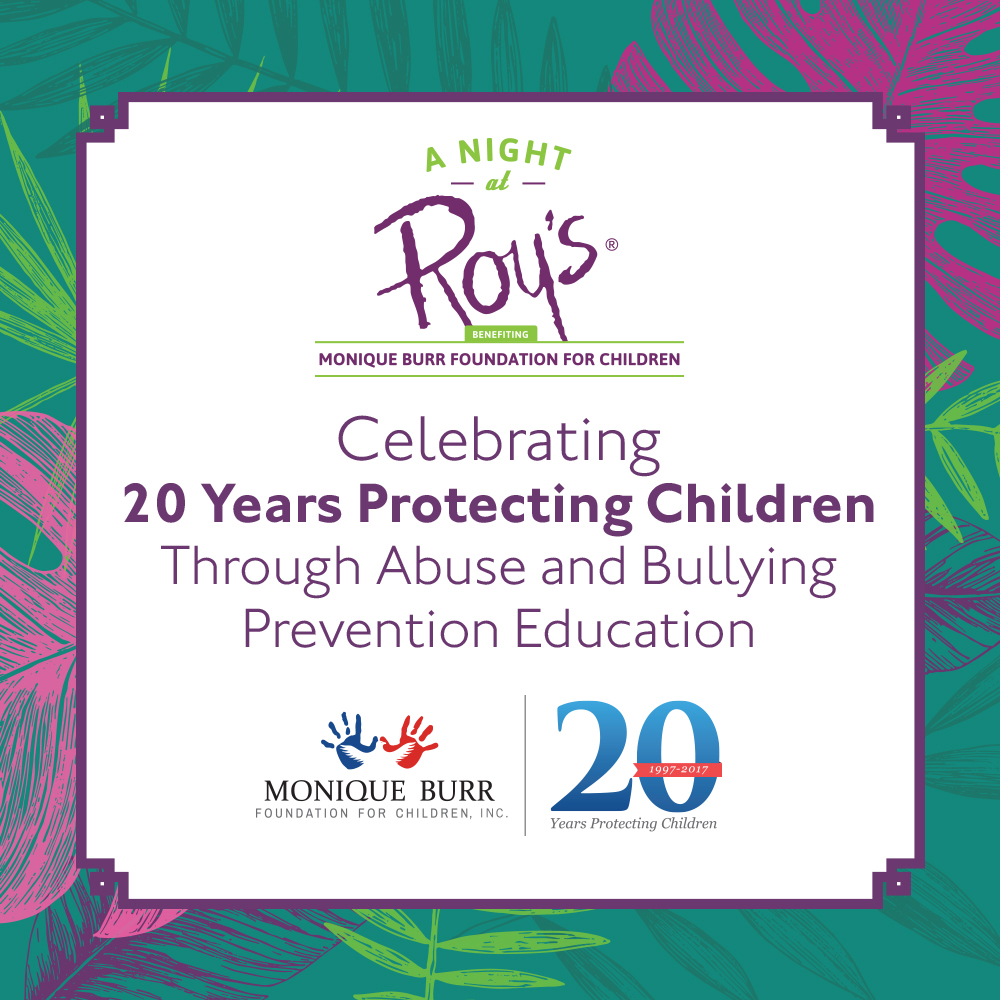 The Monique Burr Foundation for Children is busy preparing for our annual fundraiser, A Night at Roy’s on May 16th. This is always an exciting and fun event, but this year is extra special as MBF is celebrating its twentieth anniversary.

For those unfamiliar with how the Monique Burr Foundation began, here is the story. In 1996, Edward Burr and his wife, Monique Burr, were traveling for their tenth anniversary when their vehicle was hit and Monique was tragically killed. Monique was a dedicated community advocate who worked tirelessly to protect children. To continue her legacy, Ed started the Foundation one year to the date of her death. Although Monique’s death was a terrible loss to her family, friends, and community, through her work, and the work of the Foundation since, thousands of children’s lives have been improved.

In twenty years, the organization has seen exponential growth, and the impact on children has been tremendous. Here is a timeline of our history and accomplishments to date:

From 1997 to 2008, MBF provided a variety of services to help children, including Monique’s Safety Net (an in-home visitation program for at-risk children), grants to support other organizations, and the Good Touch Bad Touch (GTBT) program to 16,000 students in Northeast Florida.

2008: Lynn Layton joined MBF as the executive director, and the organization made the decision to focus solely on prevention education.

2009: Lynn Layton joined the Florida Governor’s Education Cooperative Planning Team. At that time, Florida had been reviewing prevention education curricula for over two years and was unsuccessful in finding an effective, comprehensive program.

2010: MBF was awarded a grant from Senator Ander Crenshaw’s office to create a new curriculum. MBF partnered with Childhelp (then owner of GTBT) and Arizona State University to create what is known today as MBF Child Safety Matters™.

2011 – 2014: Over the next three school years, MBF continued to improve and expand MBF Child Safety Matters, and provided the program to a total of 436,000 students across the state of Florida at no cost to schools through grants and fundraising events.

2013: MBF received the Childhelp Corporate Award for working to protect children in Florida.

2014 – 2015 School Year: MBF received a state appropriation through the Office of the Florida Attorney General to continue to offer the program at no cost to all Florida public elementary schools in Florida. During this school year, MBF reached 418,000 students, more than double the previous school year.

2015 – 2016 School Year: MBF received the first of a three-year recurring appropriation. During this year, the MBF Child Safety Matters curriculum underwent the first independent professional program evaluation by Florida State University. The evaluation showed participating students had 96% pre- to post-test gains, and over 90% of facilitators were implementing the program with fidelity. This same year, MBF launched the first program pilot outside of Florida, at CARE House in Dayton, Ohio. We also received additional funds from the Florida Attorney General, along with funds from the Mazda Foundation and Community First Cares Foundation to develop and pilot a middle school program, MBF Teen Safety Matters™. Additionally, we developed a mobile app, Child Safety Matters, and online courses to help parents and professionals understand mandatory reporting in Florida and to help protect children from bullying, cyberbullying, and online dangers.

2016: MBF received the Jacksonville Business Journal’s Innovators in Education Award, and was runner-up for the Florida Blue Sapphire Award.

2016 – 2017 School Year: This year, MBF began the first of a two-year program evaluation with noted prevention expert David Finkelhor, Ph.D., Director of the Crimes Against Children Research Center, along with three researchers from the University of Florida. Also, MBF received funding from the Ponte Vedra Beach Rotary to develop and pilot a companion after-school program, MBF Child Safety Matters is Cool After School. MBF also developed additional online courses, including a course for protecting children from child sexual abuse and a course for recognizing and preventing human trafficking (currently under development).

Much has changed over the years, but one thing remains: our dedication to protecting children and our commitment to continue Monique’s legacy. Thank you for following us, supporting us, and helping us better protect children!