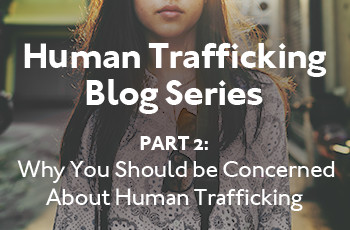 Why You Should be Concerned About Human Trafficking

Victims of human trafficking are frequently lured by false promises of a well-paying job, stability, education, or a loving relationship. Victims can be men or women, adults or children, foreign or U.S. citizens. While they share the trait of vulnerability, victims have diverse ethnic and socio-economic backgrounds, varied levels of education, and may be documented or undocumented. As defined by U.S. law, victims of human trafficking can be divided into three populations:

By these definitions, a victim of human trafficking could be anyone you know. In this post, we will focus on child sex trafficking and how this crime is affecting us all.

The fastest growing segment of those being trafficked sadly is children. With the average age of entry into the sex trade in America being 14 – 16 years old, traffickers seek young boys and girls simply to exploit for profit. But how is this happening here, in our country, on our streets, and in our neighborhoods?

While the research on child sex trafficking is still somewhat limited, a national survey done in 2009 showed that crime against teens ages 12-17 was more than two times the national average. Child sex trafficking is one of the worst crimes against youth because in addition to the sexual abuse suffered, child victims are treated as nothing more than a commodity and used for economic gain.

The rise of the Internet and the rise of child sex trafficking is not a coincidence. Technology has given us ways to connect with others and access things we want like never before. And while most of us use technology in positive, helpful ways, others are now using it in harmful, destructive ways. If you think sites like Amazon, Netflix, and Twitter top the charts in number of visits, you’d be wrong. According to A21, a site dedicated to abolishing trafficking, there have been more visits to adult porn sites than visits to Netflix, Amazon, and Twitter combined. And it gets worse:

The dark net is a network on encoded websites that sit behind publicly available sites hidden from normal search engines. According to The National Center for Missing and Exploited Children, 22 million photos and videos involving child pornography have been reported, largely due to the use of the dark net, making child pornography one of the largest industries to date; grossing $20-30 billion a year.

Documented cases of child sex trafficking show that traffickers are using technology in a variety of ways:

The victims used to be runaways and throwaways, but as it turns out now, are more likely the girl next door. Every day, children and teens are being targeted online. They are groomed, enticed and manipulated into the dark world of human trafficking, often before they even know what has happened.

Over the course of days, weeks, or months, traffickers target a vulnerable child and create a seemingly loving and caring relationship with them in order to establish trust and allegiance. The traffickers coerce their victim into providing them with nude pictures and once they have this, the exploitation escalates. These relationships may begin online before progressing to a real-life encounter, as it is not uncommon for youth to meet their traffickers willingly for sex before then being trapped and being forced to have sex with others. It is a purposeful, insidious, and all too common process.

In approximately 54% of human trafficking cases, the recruiter is a stranger, and in 46% of the cases, the recruiters know the victim. Fifty-two percent of human trafficking recruiters are men, 42% are women, and 6% are both men and women. Once they have a victim, traffickers use a variety of ways to “condition” their victims, including subjecting them to starvation, rape, gang rape, physical abuse, beating, confinement, threats of violence toward the victim and victim’s family, forced drug use, and shame.

What does this have to do with you?

The FBI estimates that over 100,000 children and young women are trafficked in America today. They range in age from nine to 19, with the average being age 11. Many victims are not just runaways or abandoned, but are from “good” families who are coerced by clever traffickers. If you have children at home, or know children you care about, they could be next. It is foolish of us to think it won’t happen to our kids because it happens to kids just like ours every day.

In light of such staggering information, what can we do? How can we, as one person fight this? John F. Kennedy once said, “Each time a man stands up for an ideal, or acts to improve the lot of others, or strikes out against injustice, he sends forth a tiny ripple of hope… and crossing each other from a million different centers of energy and daring those ripples build a current that can sweep down the mightiest walls of oppression and resistance.”

Awareness and education is the first step. Share this information with others, and then stay tuned for our final two blogs in this series to learn what we at MBF are doing, and finally what you can do to help.

What Is Human Trafficking

Why You Should Be Concerned About Human Trafficking

What MBF is Doing About Human Trafficking

What You Can Do About Human Trafficking