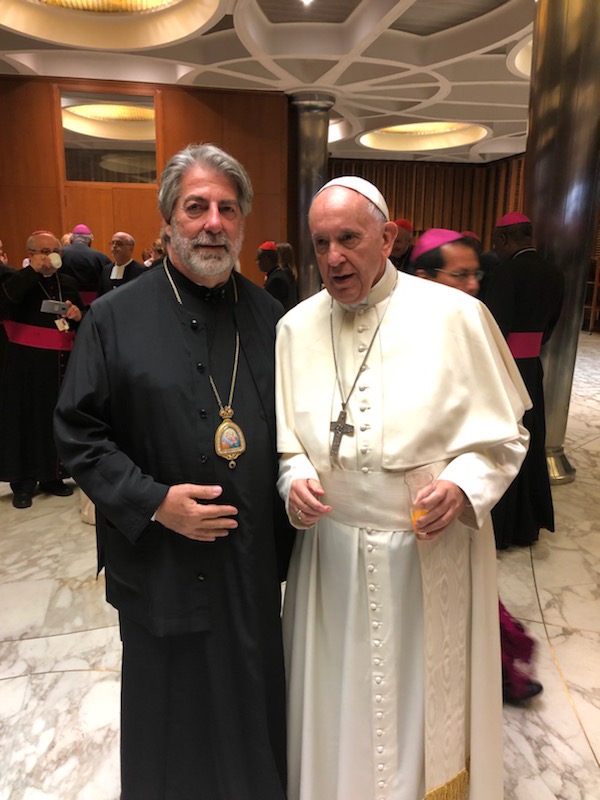 As we wrap up Human Trafficking Prevention Month, MBF is proud to share this guest blog by Metropolitan Nikitas Loulias of the Greek Orthodox Church, a passionate advocate for victims and for prevention!
Over the past few years, I noticed the increasing number of articles, posters, messages about the issues surrounding human trafficking and modern slavery. All of this pushed me to research the matter and learn about things.  The more I read, the more I was horrified and I knew I had to act, especially since I am  a clergyman and one who teaches theology.
As I spoke with family and friends, I came to learn that the average person had little or no knowledge of the extent of the situation.  Most people related trafficking to massage parlors, prostitution, and sex parlors.  Most did not know or realize that millions were forced into labor, that human organs and body parts were being sold, and human beings had become simple commodities caught in a vast network of criminal activity.  With the blessing of Greek Orthodox Ecumenical Patriarch Bartholomew, we formed a Task Force that would carry on a variety of programs that would work against this abomination and plague.  The Task Force has chosen to work on two levels.  The first of these is on an international level, by convening fora in various cities to see how religious institutions, government agencies, civil authorities, academics, NGOs, and others might better work together to defend the vulnerable and the marginalized.  The Task Force also began organizing seminars and other programs that would educate the public about the dangers associated with modern slavery.  Emphasis was given to informing and enlightening parents and young people, as well as educators.  The Task Force not only brought together speakers and concerned parties but it also allowed for various agencies to be present and witness to their efforts.  These actions were new steps for the Orthodox church communities but it showed the greater community and society at large that all must be ready to act if this plague is to be overcome and conquered.
Educators, administrator, religious leaders, youth leaders, coaches and especially parents need to be vigilant and armed with knowledge of the criminal activities that are taking place in our own backyards. Our children need to be protected. Education and synergy across organizations are critical. We live in a country where we have the right to “life, liberty, and the pursuit of happiness”.  These sacred values must become real for all. Finding curriculum such as MBF Child Safety Matters provides a fundamental foundation for adults and children to not only understand the severity of crimes against our youth but also how to have a conversation that will make an impact.
One evening at a gathering of young people, a student came up to me and asked – “Aren’t you the bishop who is working against trafficking?”  I simply replied “Yes”.  She then turned to me, her eyes filled with tears, and she whispered “Thank you. I am a victim”.
It is a difficult battle and struggle, but it is one that demands action. Silence, ignorance, and passive acceptance are not acceptable. Our children’s safety is being threatened every day.
Metropolitan Nikitas Loulias
Greek Orthodox Church and Professor of Theology at University of California – Berkeley
Tags: Child Abuse, Child Safety, Child Sexual Abuse, Human Trafficking