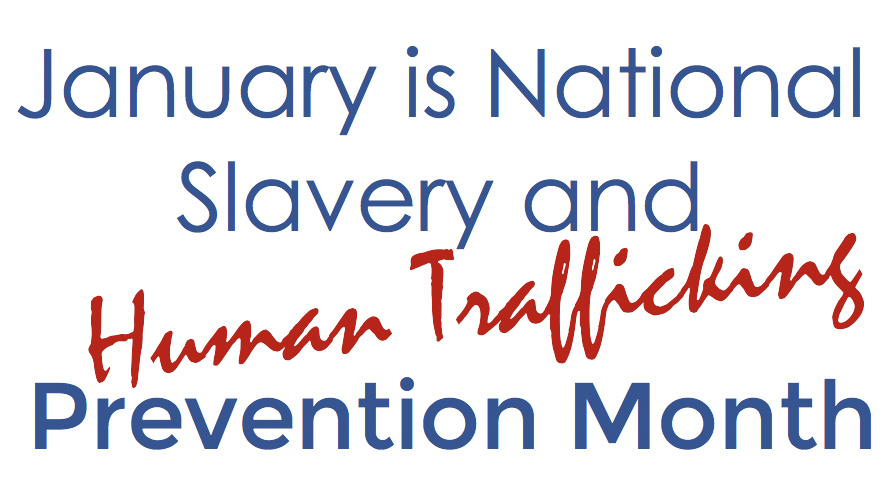 Human trafficking is now the SECOND MOST PROFITABLE CRIMINAL ACTIVITY in the United States!

So, as you wrap up your holiday and new year celebrations, we are asking you to shift your focus to advocacy and prevention. January is Human Trafficking Prevention and Awareness Month in the U.S., and together, we can help stop this devastating crime!

Let’s start by learning what human trafficking is.

According to the Polaris Project, human trafficking is a form of modern-day slavery where people profit from the control and exploitation of others. As defined under U.S. federal law, victims of human trafficking include children involved in the sex trade, adults age 18 or over who are coerced or deceived into commercial sex acts, and anyone forced into different forms of “labor or services,” such as domestic workers held in a home, or farm-workers forced to labor against their will.

There are two types of human trafficking, neither of which necessarily involves the smuggling of an individual, a frequently held misconception of trafficking.

Labor trafficking is the recruitment, harboring, transportation, provision, or obtaining of a person for labor or services, through the use of force, fraud, or coercion for the purposes of subjection to involuntary servitude, peonage, debt bondage, or slavery.

And trafficking happens more frequently than we know or would care to believe, and in our own communities.

Sex traffickers target children because of their vulnerability and innocence, as well as the market demand for young victims. Those at risk are not just high school students—studies show traffickers have been known to have victims as young as 12.

Traffickers target minor victims online, on the street, or at large public places such as sporting events or shopping malls, or through friends or recruitment by other youth at schools and after-school programs, so no one is immune.

Federal and state governments are working to end this horrific and devastating epidemic, but parents MUST be involved if we are to truly protect youth. Parents must talk to their kids and explain trafficking and how children and teens are groomed and recruited. For parents, this means being educated.

MBF provides parents and professionals a free, one-hour online training to help you learn more. For Human Trafficking Prevention and Awareness Month, we hope every parent will log-in and take this online course to learn how children and teens are groomed and how to prevent it from happening to your child. You can access “Preventing, Recognizing, and Responding to Human Trafficking” here.

And MBF’s Prevention Education Programs teach youth about trafficking in an age appropriate and safe way. Learn more about the programs and then, make sure your child’s schools and sports organizations are using MBF Programs. If they aren’t, let them know about the programs or reach out to us.

Office to Monitor and Combat Trafficking in Persons

For an extensive list of national and international agencies and website resources, visit the Child Welfare Information Gateway’s “Responding to Human Trafficking of Children” page.